Leading energy companies are investing in large solar power plants worldwide. Even private households are more and more setting up their own solar panels, adjusting to the ecological mindfulness society, which comes with economical benefits. The need of accurately predicted power production is critical for organizing how, where and when, to use the produced solar power energy in the most efficient and economical way. This is where the BCDC Energy weather forecast project has an important role, to prepare new standards on the ability to utilize the energy resources in best way in future.

The solar energy forecast tells one how much energy there can be available for the next hours or next days. Why does the solar power production forecast sometimes go wrong and what can be done to make them better? Clouds, among all weather parameters, have the largest impact on surface level solar radiation. Therefore, it is not surprising that solar power production forecasts are highly sensitive to cloud forecasts. Earlier results show that the forecasted cloudiness is underestimated, to some extent, which results in over-prediction of solar radiation. How can we make the models forecast better in this aspect? 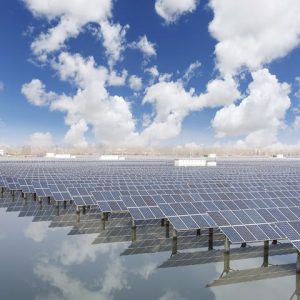 Numerical Weather Prediction (NWP) models are highly capable of predicting several meteorological parameters. In this study we focus on the cloudiness and the related solar radiation. In general the clouds and radiation are forecasted well, when compared with observations. Still there are and will be uncertainties in the forecasts. This especially relates to what kind of weather situations being predicted. For example during a warm summer day the Cumulus “warm air-bubbles”-clouds (which later can grow into a rain-shower; Cumulonimbus), is something that the forecast model does predict, but the accurate placement and timing of such clouds are challenging. Often these clouds are in the right regional area but with a displacement of few kilometers and this can, naturally, have a critical effect on the solar power production in a specific point location.

Frontal situations, with their large-scale broad and deep cloud-structures, are generally easier to predict in a forecast model. One key factor, determining the solar power energy, is the thickness of clouds. A very high and “light” Cirrus cloud can easily be penetrated by the sun-rays and give almost full radiation at that time, whereas a thick rain-shower cloud (Cumulonimbus) would barely leave any sun-radiation reaching the ground.

The aim of our project-work is to improve the predictability of the cloud placement, timing and properties (e.g. thickness and opacity) and thereby the quality of the radiation output, when it comes to small scales in both time (hours) and the areal coverage (kilometers). The current work involves starting the weather model from a more accurate initial state, i.e. where the clouds have better placement and vertical extension, from the beginning of model start. With this technique the forecast model has the potential to better predict the cloudiness for the next hours and day-ahead.

We use satellite data and surface observations of clouds, in order to describe the cloud field at the starting point of the model run. The satellite gives the advantage of seeing the clouds from above and it does so with high accuracy (see figure 1). However, satellites do not “see” what is beneath the first cloud-top, which is a limitation and the reason to include surface observations. Several meteorological surface stations are able to measure the height of the cloud-base. By combining this information with satellite data (such as the cloud-top temperature; figure 1, right panel) we get an estimate of the vertical extent of the cloud-structure. This is not a trivial task though.

Results have shown that the weather prediction model over-predicts the solar radiation in the first hours of the forecasts (see figure 2, left panel), because of either a displacement of the cloud field or too transparent clouds. The new approach of starting the forecast model with a more accurate cloud field is investigated in model experiment, where we run the weather forecast model for one month (July 2016) over Scandinavia domain and produce forecast out to +48 hours (i.e. 2 days) twice a day. The first results from our new experiment show that we are able to improve the cloud-free situations, i.e. the high radiation values (~700 W/m2) are lowered and are now at the same level as the observations (see Fig. 1). On the other hand, it is also seen that we underestimate the solar radiation in cloudy situations (see figure 2, right panel).

As of now, we investigate how to further optimize our new model. One working hypothesis is to optimize the vertical extent of the clouds. As mentioned before, the thickness of the cloud affects to the opacity (penetration of sun radiation). Our first verification results indicate that we get too thick and opaque clouds. Especially the high Cirrus-clouds, which are usually thin with high opacity, are modeled with too thick vertical extension zone. Finding out these problems helps us on how to further adjust the cloud assimilation methodology in the weather model and to improve the cloudiness and radiation output for the upcoming 1-2 days forecast. This is for the benefit of companies and households when planning their solar-power energy resources, in a more efficient and economically secure way. 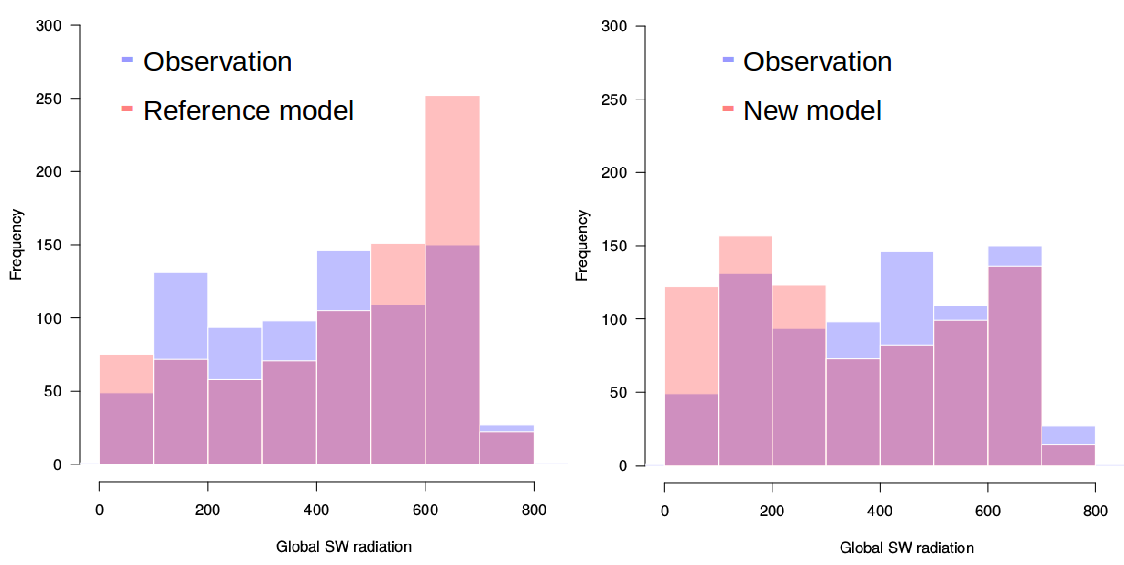